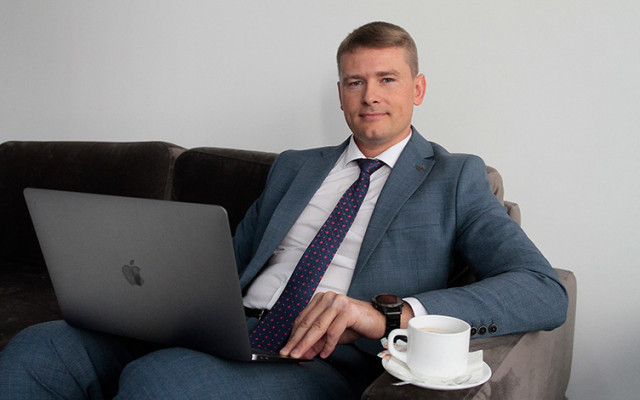 The National Bar Association of Ukraine (hereinafter - the UNBA) went through a series of trials in 2020. Those were a pandemic, a reform of the legislation and the judiciary, and violations of the rights of attprneys. Still, there are achievements to be proud of and plans. This is what Vadym Krasnyk, the Head of the Secretariat of the UNBA, Bar Council of Ukraine, told in a blitz interview.

The UNBA will work, and all obstacles and restrictions are only temporary inconveniences

- Professional holiday, 8 years of the UNBA, the end of the year - all these prompts to summarize the activities of the association for the year. What was it like for the UNBA?

- On November 17, 2012, a new page in the history of the Ukrainian Bar began - the Ukrainian National Bar Association was established. And today we have managed to build a powerful and really working organization, where there is a clear balance of authority, a high level of professional management at both the regional level of advocacy and national.

For 8 years of activity we have constantly improved the standards of work to be a modern, transparent and efficient institution.

This path was complicated by external challenges, such as attempts of the authorities to restrict the professional rights of attorneys by the Bill on the Bar and Legal Practice (№9055) and to deprive advocacy of the exclusive right to represent clients in court by the bill "On Amendments to the Constitution of Ukraine (concerning the abolition of the attorney's monopoly)" (№1013). We successfully repelled attacks on the institution itself and fought for every attorney whose rights were violated.

- What are the 3 events in the life of the UNBA which you remember the most?

- It is, of course, effective and continuous work in the conditions of quarantine. We have conducted training events, large international events online, giving attorneys the opportunity to meet the annual minimum score. The UNBA committees worked similarly.

We continued to build relationships with partners: we signed memoranda with the Centre for Forensic Science and Expert Studies, the Association of Women Attorneys of Ukraine "YurFem", the State Judicial Administration, we also reached the agreement on the cooperation with the American Bar Association.

The achievements include the active participation of the UNBA in the implementation of the "Electronic Court". In particular, it was possible to defend the proposal to combine the capabilities of the Unified Register of Attorneys of Ukraine with the subsystem of the Unified Judicial Information and Telecommunication System "Electronic Court". This is stated in the memorandum between the UNBA and the State Judicial Administration of Ukraine. There has been a series of joint efforts in this direction to make the e-court an accessible and convenient tool for attorneys, especially in quarantine situations where access to court is physically difficult.

Top events include a series of national discussions on access to justice with the participation of the UNBA Head and the managment of the High Council of Justice. This idea arose when the Bar Council of Ukraine (hereinafter - BCU) began to receive complaints from attorneys about the actions of judges of the Supreme Anti-Corruption Court. When we began to analyze the problem, it turned out that it had reached the scale of judicial reform, the state of justice. The UNBA initiated the discussion, and 3 events have already taken place, at which attorneys, judges, representatives of judicial and self-government bodies discussed the consequences of judicial reform and new bills that are now on the agenda of the parliament. Thus, we have created a professional public platform for open discussion of the problems of the justice system.

- What problems did the UNBA face this year, apart from the impossibility of holding offline meetings of the BCU?

- All the challenges of 2020 did not pass us by. Due to the pandemic caused by the spread of COVID-19 and quarantine, we had to adapt our activity to remote or mixed mode. The BCU meetings began to be held online, although previously only extraordinary meetings were held by electronic voting. The entire secretariat and the Bar self-government bodies switched to the new rules, when it was difficult to take qualification exams and access to the premises of councils and qualification and disciplinary commissions of the Bar. Currently, according to the decision of the BCU, conferences of regional bar associations have been postponed due to the quarantine.

After the introduction of quarantine, we saw that some judges did not consider the quarantine restrictions as the valid reason for the failure of attorney to appear in the court. In particular, the UNBA received many complaints against High Anti-Corruption Court of Ukraine (hereinafter - HACC) judges. They took the position that attorneys allegedly did not appear in court with a direct intent to disrupted the trial. The Association has repeatedly raised this issue, addressed the Council of Judges and the leadership of the HACC. The head of the UNBA has repeatedly drawn the attention of the leaders of the Council of Judges of Ukraine, High Council of Justice, the highest court to the problem. The judges continue to manipulate this information, deliberately obstructing the activities of attorneys.

"During the 8 years of the UNBA's existence, the legal community has increased almost tenfold"

- The number of attorneys in Ukraine is growing rapidly. Do you think there will be a desire to become an attorney in the new year and whether it is necessary to meet European standards in relation to the population and attorneys?

- Currently, there are 58,776 attorneys in Ukraine. Among these attorneys, 44,177 attorneys actually conduct their activities. During the 8 years of the UNBA's existence, the legal community has grown almost tenfold.

In Ukraine, the proportion is one attorney per 800 citizens. And this is even better than in some developed European countries. Therefore, the growing number of attorneys is a constant trend, but we already have a fairly large professional community.

The ratio between the population and the number of attorneys in European countries in 2019 is following: in Germany - 1 attorney for 466 citizens, in Austria - 1 attorney for 1375 citizens, in Hungary - 1 attorney for 753 citizens. We have a good indicator to say that there are no objective reason to believe that due to the alleged lack of lawyers, citizens' access to legal aid may be problematic. Although this was emphasized by the authors of the project №1013 on the abolition of the so-called attorney monopoly.

This means that in Ukraine the availability of legal aid to citizens is fully ensured through the balance of the number of attorneys, and I am sure that next year the trend of growth of the legal community will continue.

- Can you share the UNBA's plans for 2021? Have the association already set up the work mode in the quarantine regime? Will the lockdown in the new year destroy the best hopes?

- Like all of us, I have a great hope that 2021 will become more stable and predictable. In the new year, the new UNBA`s strategy will be implemented. Obviously, the turbulence caused by the pandemic will be a risk.

There are answers to these risks. The whole world rebuilds, and we are ready to adapt our procedures to the new conditions of remote or online activities. After all, under no circumstances we can afford a complete lockdown and the cessation of those services without which advocacy is impossible. The UNBA will work, and all obstacles and restrictions are only temporary inconveniences.

The material was published in the publication "Law and Business".

the Head of the Secretariat of the UNBA, Bar Council of Ukraine

The UNBA will work, and all obstacles and restrictions are only temporary inconveniences