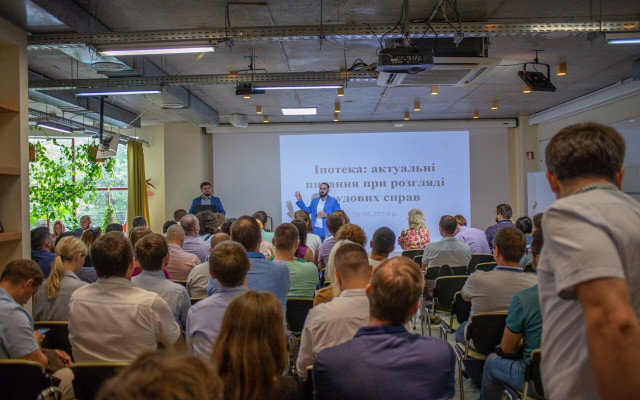 The new order on professional development of advocates was introduced on July 1, 2019. Is has been already called the most progressive and the one according to the needs of the modern world.

The new order on professional development of advocates was introduced on July 1, 2019. Is has been already called the most progressive and the one according to the needs of the modern world.

Now advocates, who want to improve their qualification can freely choose any event in any region, signing up for it only in one click.

In Odessa such an event was held together with UNBA Next Gen Committee and the judge of Prymorskii District Court of Odessa Denys Dontsov.

During a discussion of the topic “Mortgage disputes. Theory and practice” there were 100 advocates participating. The importance of this event lies in fact, that the seminar was brought to life together with practicing advocates and judges, which foremost allowed to break the most controversial questions in this category of cases.

The judge of Prymorskii District Court of Odessa Denys Dontsov shared the newest views on this category of cases in the Supreme Court and the High Court, which helped all present at the seminar advocates.

Advocate Spartak Chernushych reported about the last judicial practice in disputes about extrajudicial appeal on mortgage penalty, and also about the problems, that may occur while renewing rights in cases of illegal registration of mortgage subjects.

Advocate and coordinator of UNBA Next Gen in Odessa City Volodymyr Matsko spoke about problems in disputes about issuance of executive letter’s duplicates and renewing the term of their presentment for the forced collection.

This seminar was an example of the cooperation on judges and advocates during the process of professional development, which is positive in the process of discussing theoretical problems of usage of certain norms of legislation, as by judges, as by advocates with the aim to provide and implement effective protection of rights and freedoms of citizens.

Seminar’s participants positively accepted innovations in the order of professional development of advocates, as now all the material was structured in presentations, and points for passing the course were counted automatically, that eliminated the need to create paper reports and send them to the Bar Councils of certain regions.