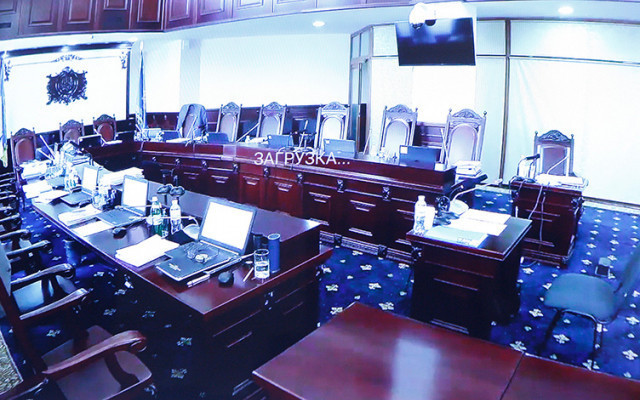 Bill №3711 is a reflection on the state of the judicial system of Ukraine. Such reflection is quite logical, urgent and desirable as it is necessary to comply with the requirement of access to justice

Bill №3711 will provide access to justice, which is a component of the rule of law principle

Criteria for the structural reform

President submitted to the parliament a bill "On Amendments to the Law of Ukraine "On Judiciary and Status of Judges "and some laws of Ukraine on the activities of the Supreme Court and judicial authorities" (№3711). On August 7, 2020, Dmytro Razumkov in the letter to Maria Peichinovych-Burych, the Secretary-General of the Council of Europe, asked the Venice Commission to issue a conclusion concerning this bill. The Venice Commission adopted such a conclusion within a month.

As noted in the Conclusion (paragraph 26), the bill №3711 provides for five significant changes:

• there are new rules on the structure and role of the High Council of Justice, the composition and status of the High Qualifications Commission of Judges (hereinafter - HQCJ);

• it establishes the Competition Commission for the selection of HQCJ members;

• it abolishes the previously introduced reduction of judges of the Supreme Court to 100 judges;

• it sets forth disciplinary proceedings.

To understand the reasons for the development and parliamentary consideration of the bill №3711, it should be recalled that on July 23, 2020, the Government of Ukraine and the European Union signed a memorandum of understanding. Among other things, it refers to the Conclusions of the Venice Commission and its annexes on the criteria of structural reform, which also relate to «independence, integrity and efficient functioning of the judiciary."

A separate memorandum with the International Monetary Fund provides for similar obligations, including the creation of:

• a new HQCJ through a transparent selection procedure conducted by the Competition Commission with international participation;

• Ethics Commission with international participation to conduct a one-time assessment of the integrity and ethics of members of the High Council of Justice.

Bill №3711 concerns the first part of these commitments. The Ukrainian authorities have announced the existence of one more bill that will fulfill the remaining obligations, it will be also submitted to the Venice Commission for receiving a conclusion.

Both the provisions of the bill №3711 and the content of the Conclusion are now widely discussed. However, let's have a look at this bill through the prism of the principle of the rule of law, in particular its component - access to justice.

The role of the judiciary

According to the Association Agreement between Ukraine and the EU, in the framework of cooperation in the field of justice, freedom, and security, the parties attach special importance to the application of the rule of law and strengthening of all governmental institutions in general and law enforcement and judiciary bodies in particular. The main aim of the cooperation is to strengthen the judiciary, to increase its efficiency, to guarantee its independence and impartiality, and to combat corruption (Article 14).

The Rule of Law report approved by the Venice Commission at the 86th plenary session (March 25-26, 2011) emphasizes that the role of the judiciary is essential in a state based on the rule of law. The judiciary is the guarantor of justice - a fundamental value in a state governed by the rule of law. The judiciary should be independent and impartial. Independence means that the judiciary is free from external pressure and is not controlled by other branches of government, especially the executive. This requirement is an integral part of the fundamental democratic principle of separation of powers.

Judges should not be subject to political influence or manipulation. Impartiality means that the judiciary, even on the surface, does not appear to be biased over the outcome of the case. The hearing should be fair and open, and such a hearing and decision-making in the case should be conducted within reasonable timeframes (paragraphs 54-56). The requirement to hear the case within a reasonable time is an integral part of the right to a fair trial enshrined in the Convention for the Protection of Human Rights and Fundamental Freedoms.

In this context, the case-law of the European Court of Human Rights should be considered. A number of the decisions of the ECtHR emphasize that the requirement to hear a case within a reasonable time, prescribed in Article 6 of the Convention, includes the importance of enforcement of law without delay. The delay may impair the effectiveness or truthfulness of the proceedings (H. v. France, § 58; «Katte Klitsche de la Grange v. Italy», p.61). Article 6 § 1 of the Convention obliges Member States to organize their legal systems in such a way as to ensure the compliance of courts with its requirements.

The ECtHR has repeatedly emphasized the importance of enforcement of law without delay, which may impair its effectiveness or veracity (Scordino v. Italy, # 1, § 224). The sum of the State's violations creates a case-law incompatible with the Convention (Bottazzi v. Italy, § 22).

“Reasonable terms of consideration of the case by the court” is the basic principles of judicial proceedings prescribed in the Constitution of Ukraine (Article 129).

The decision of the Constitutional Court of 13.06.2019 №4-p/ 2019 states that the Constitution defines the basic principles of justice by guaranteeing the right of a person to judicial protection in Part 1 of Article 55 of the Basic Law. The purpose of this Article, among others, is to ensure the impartiality of the members of the court, compliance of the decision with the rule of law, as well as due, effective, and fair restoration of the person's rights within a reasonable time (paragraph 8, paragraph 2.3, paragraph 2 of the motivating part).

The Constitutional Court also draws attention to the fact that granting a right to appeal is a part of the constitutional principle of justice, the aim of which is to ensure the effective judicial protection of human and civil rights and freedoms while complying with constitutional requirements for a reasonable time for adoption of the court decision (paragraph 13, item 2.3, item 2 of the motivating part).

Besides, the Constitutional Court reasonably states that these constitutional requirements aim to ensure the reasonable timeframes for consideration of the case (paragraph 7 of Part 2 of Article 129 of the Constitution). The appellate review of any procedural decision, which does not resolve the case on the merits, will delay the process and, consequently, will violate the requirement of reasonable timeframes for consideration and resolution of the case on the merits, which eliminates the essence of the right of access to justice (paragraph 6, item 2.2. item 2 of the motivating part of the decision of the Constitutional Court of 17.03.2020 № 5-r / 2020).

At the same time, there is a catastrophic shortage of judges, that is why the implementation of the principle of the rule of law in this aspect is impossible. HQCJ has not been working for a year. The result of the actual cessation of its activities is a "staff shortage". The state lacks more than 30% of the total number of judges. Of course, this negatively affects the quality of justice, including the right of everyone to have their case heard by a court within a reasonable time.

Because of this, we have an excessive burden on working judges and delays in the consideration of cases. As a result, lawyers and their clients are waiting for court decisions for a long time, the quality of such decisions is declining.

In general, this constitutional right ceases to be effective and becomes illusory. Because of that the State suffers significant image losses in the international arena and faces a risk to receive a "red card" for non-compliance with its international obligations.

However, a reasonable workload, a proper working infrastructure, and a guarantee of employment for judges and court staff are particularly important for the legitimacy and good reputation of the judiciary. These measures are important to prevent corruption in the judiciary. This is emphasized in Chapter V of the Opinion of the Advisory Council of European Judges dated 9.11.2018 №21 (2018) on the prevention of corruption among judges.

However, this problem can be partially solved by the adoption by the Verkhovna Rada of the bill №3711, notwithstanding the lack of quality of the bill. Still, the Venice Commission supports it and identifies it as urgent.

However, it should be noted that the conclusion of the Venice Commission concerns only the bill №3711. While discussing the provisions of this bill, the above-mentioned conclusion should be considered.

The key positions of Conclusion of the Venice Commission give grounds to state the following.

The issues related to the integrity of the High Council of Justice members should be addressed comprehensively, despite the fact they cannot be covered by a single law.

The relationship between the High Council of Justice and the HQCJ in terms of delimitation of their functional responsibilities is a complex issue that should also be addressed comprehensively. Foreign experts can only perform an advisory function.

Finally, as the Venice Commission noted, the bill №3711 is only a small step in the right direction.

According to its authors - representatives of the Office of the President, - this bill will address a limited range of urgent issues. Wider reform of the judiciary should be prescribed in a separate law, the provisions of which should be in line with the recent commitments taken by Ukraine towards the EU and the IMF (paragraph 74 of the Conclusion).

Head of the Free Legal Aid Committee of the UNBA, Member of the Commission on Legal Reform under the President of Ukraine, Member of the Scientific Advisory Councils of the Constitutional Court of Ukraine, the Supreme Court and the Ukrainian National Bar Association, Associate Professor of Criminal Procedure of Yaroslav Mudryi National Law University, PhD in Law, Associate Professor, Honored Lawyer of Ukraine

Bill №3711 will provide access to justice, which is a component of the rule of law principle