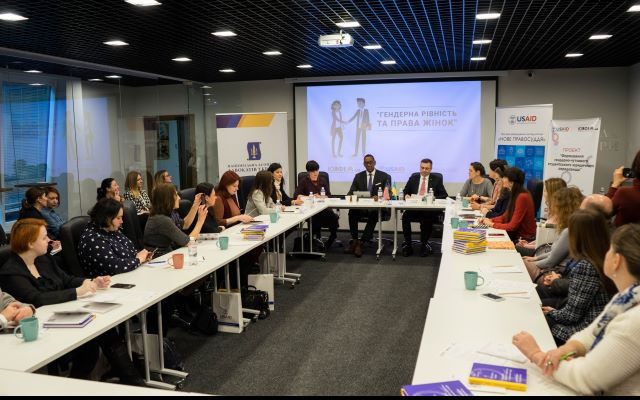 On February 13, a presentation of the training course "Gender Equality and Women's Rights" was held at the UNBA office by Ukrainian Woman Lawyers Association "JurFem" in partnership with UNBA (on the initiative of the UNBA Gender Policy Committee and the Committee on Legal Education) for law professors, and can also be used for teaching by judges and advocates. This training program has been developed by experts of the Association of Women Lawyers of Ukraine “JurFem” within the framework of the USAID New Justice Program - USAID New Justice Program.

Speaking at the event, Khrystyna Kit, Chairman of the Ukrainian Woman Lawyers Association "JurFem", stressed the importance of an educational component in promoting gender equality in Ukraine, especially in the field of legal education. This is what prompted the experts of the Association of Women Lawyers of Ukraine “JurFem” - Khrystyna Kit, Yaryna Voloshyn, Olha Poiedynok, Olena Kharytonova, Larysa Denysenko to develop a comprehensive, multi-component educational and methodological course “Gender Equality and Women's Rights”.

While delivering the keynote address, UNBA and BCU Deputy Chairman, Valentyn Hvozdii stressed the importance and relevance of the issue of research on gender issues and the need to ensure gender balance in Ukrainian society in general and the advocacy in particular. Thus, Valentyn Hvozdiishared with the statistics on gender distribution in the bar: the percentage of women and men-lawyers is 38% and 62% respectively. At the same time, he emphasized that gender issues are a constant focus of UNBA, which is why the UNBA Gender Policy Committee was established in 2019, one of the goals of which is to raise gender awareness and raise gender sensitivity by practicing future lawyers.

During the presentation, the participants got acquainted with the structure of the educational-methodological course “Gender Equality and Women's Rights”, which includes the following sections: “Gender Equality and Feminism: Concepts, Development and Impact on Law and Human Rights”, “Feminism in International Law ”,“ Body and Power as a Way to Control Sexuality and Individual Freedom, ”Gender Equality in the Media”, each presented by their author.

During the event the results of the approbation of the mentioned educational-methodical course were discussed with the participation of the invited teachers of the partner universities, who noted the obvious interest of the students in its study.