In the sphere of development of judicial reform, the role of international experts and institutions has crossed constitutional boundaries - Maryna Stavniychuk 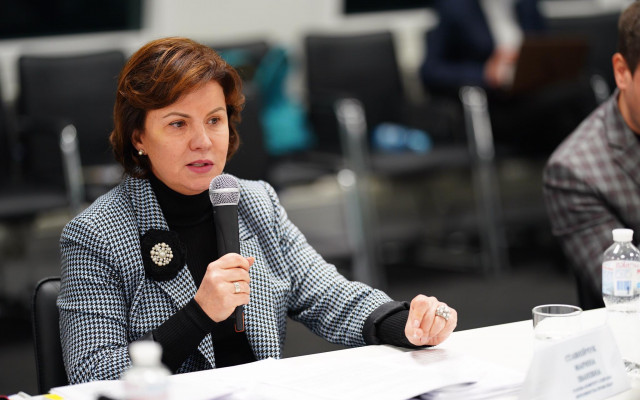 The Head of the UNBA Committee on the Rule of Law Maryna Stavniychuk pointed out the mistakes in the implementation of international cooperation with the Venice Commission and donor organizations. She mentioned them during her speech at the second national discussion "Access to Justice: Realities and Prospects". The co-organizers of the event are UNBA and the High Council of Justice.

"The tendency inherent in the so-called reform process is the inability of the Ukrainian authorities to cooperate with international institutions. This was indirectly stated by the Venice Commission in the conclusion on the bill №3711, which recorded low-quality unstable legislation, improper constitutional and legislative process, non-compliance with the law," - Maryna Stavniychuk reminded. The Ukrainian authorities also informed the Venice Commission that Ukraine had made additional commitments to reform the judiciary, including involving international donors in the judiciary.

"However, we understand that if the government wants to fulfill these obligations, the changes should be made to the Article 1 of Constitution, which will say that Ukraine is not always sovereign and independent, shares some power with the EU or European institutions," - Maryna Stavniychuk said.

She stressed that the criteria and requirements for donor organizations are not defined. Also, funding for donor projects in Ukraine has been the subject of anti-corruption investigations.

"If you raise a question concerning the participation of international experts on behalf of donor organizations, what are the criteria for donation - those for the development of Ukrainian statehood or for the possibility of establishing a corresponding colony of foreign states in our country. This is a matter of big politics, " - said Maryna Stavniychuk. However, she stressed that the dominant role of international experts is unconstitutional. "In exercising our powers, we can use the recommendations and advice of foreign organizations and states that have best practices, but the replacement of the powers of national bodies by representatives of other states and organizations does not comply with the Constitution," - Maryna Stavniychuk said.

"The concept approved in 2015 has not been repealed. It stipulates that the High Qualification Commission of Judges of Ukraine and the High Council of Justice are a single body. Although such a concept has not been canceled, another is proposed today. It has always been said that the High Council of Justice and the High Qualification Commission of Judges should consist of the most authoritative people in this field, which is in line with European principles. Today, competitive procedures are offered, in which the issue of authority is not key, although it has always been held as the key in several conceptual documents. Let us see how we understand the proceedings, what is the participation of the parties in the case, what are their procedural rights, how is the policy in the field of justice to be formed. Then we will keep the constitutional principle of the formation of the High Council of Justice, and it may have the sense to return to the same principle in the strategic decision concerning the work of the High Qualification Commission of Judges of Ukraine, and not vice versa - through competitions that allow being appointed due to foreign influence ", said Maryna Stavniychuk.

It must be recalled that the second national discussion "Access to Justice: Realities and Prospects" took place on November 30. The co-organizers of the event were UNBA and the High Council of Justice. The agenda of the discussion included strategic issues of judicial reform, the role of professional communities in the development of legislation on the judiciary and the bar, the constitutional aspects of the participation of international experts in the formation of judicial governance. The video version can be found through the following link: https://www.youtube.com/watch?v=48cOOGcaorg.