Valentyn Hvozdiy: unconstitutional provisions of any law must be immediately removed by the Parliament 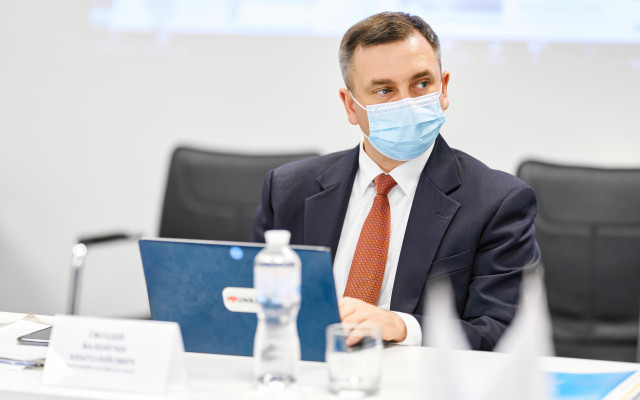 The purpose of the decision of the Constitutional Court, which declared several provisions of the Law of Ukraine "On Prevention of Corruption" unconstitutional, was to eliminate the levers of influence on the judiciary.

This conviction was expressed by the Deputy Head of UNBA, BCU Valentyn Hvozdiy during the second national discussion "Access to Justice: Realities and Prospects". Video of the performance can be viewed here.

Valentyn Hvozdiy stressed that this was the first bold decision made by a court in Ukraine recently.

"When we talk about the court today, we are primarily waiting for fair court decisions. We want the court to fulfill the function for which it was created - to ensure fair, transparent, efficient, prompt justice. This is possible in case the court is strong and independent. But today these words are heard so often that for the majority they have lost their meaning and have no practical reflection of their essence. Perhaps, the last decision of the CCU is a loud voice of the judiciary, which finally said its word and showed that judges really want to be independent,"- said Valentyn Hvozdiy.

The Deputy Head of UNBA and the BCU is convinced that the constitutional crisis was created artificially.

"I do not see any constitutional crisis in a country where there is a constitution aimed at setting boundaries for the government. The Constitution is adopted by the Parliament to ensure the observance of their rights and the guarantees they declare through the established mechanisms of restrictions on the balance of power. For the first time, in my opinion, the CCU made such a bold decision in the interests of the judiciary. If you reject all the hysteria, slogans, statements, there is a short and simple essence - you cannot exert influence and pressure on the judiciary from the executive branch. When the CCU said that we were removing leverage to make the courts fair, it was under attack. Such a discussion platform is needed to explain difficult things to people," - he said.

Valentyn Hvozdiy believes that the unconstitutional provisions of any law, which are recognized as such in any decision of the CCU, should be immediately eliminated through the Parliament.

"What needs to be done?" Firstly, do not shout "betrayal" and "everything is gone”. We need to write normal, high-quality laws, and move forward. In the law on prevention of corruption, the parliament should add one or two articles on 4 lines, which will outline the mechanism of anti-corruption control over judges, so that it does not put pressure on them. That's all, "- Valentyn Hvozdiy summed up.

It will be recalled that the second national discussion "Access to Justice: Realities and Prospects" took place on November 30. The co-organizers of the event are UNBA and the High Council of Justice. The full video of the event can be viewed here.

In October, UNBA issued a statement concerning the CCU's decision on the unconstitutionality of certain provisions of anti-corruption legislation, calling for the restoration of the supreme force of constitutional norms (https://unba.org.ua/news/5985-zayava-naau-shodo-rishennya-ksu-pro-nekonstitucijnist-okremih-polozhen-antikorupcijnogo-zakonodavstva.html).