Meeting of the President of UNBA, BCU Lidiya Izovitova with the Head of the Project "Judiciary and Society in Ukraine" of the Center for International Legal Cooperation Esther de Roy 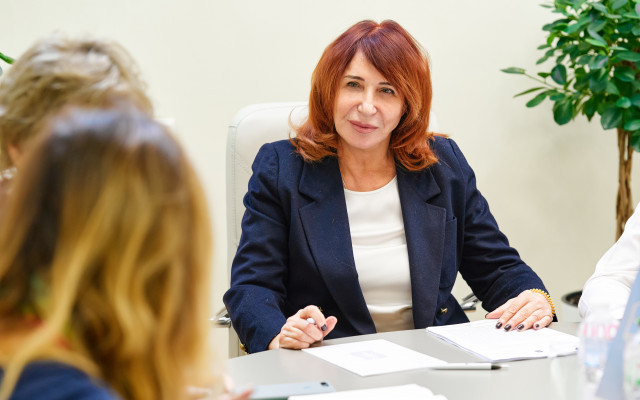 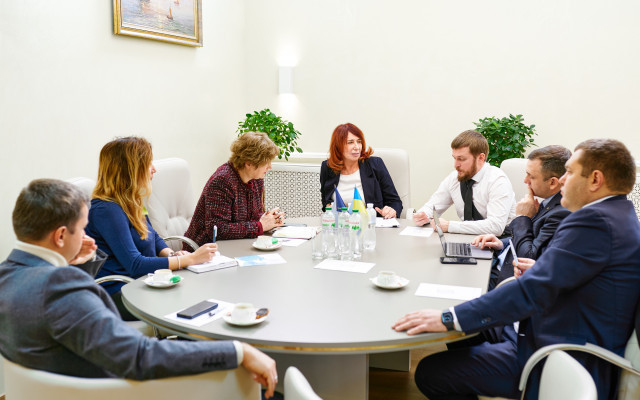 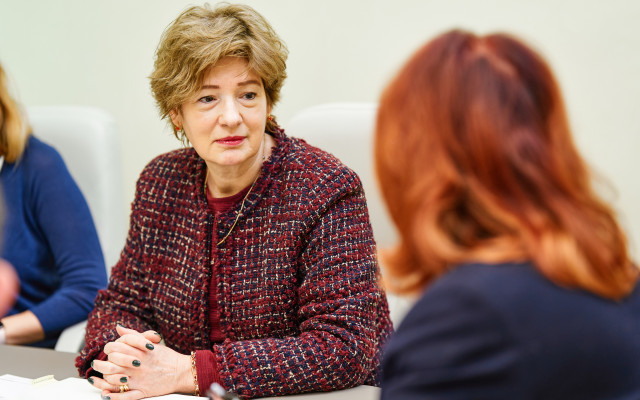 UNBA hosted a meeting of UNBA/BCU President Lidiya Izovitova with the Head of the Project "Judiciary and Society in Ukraine" of the Center for International Legal Cooperation (Netherlands) Esther de Roy. UNBA was also represented by UNBA, BCU Vice-President Valentyn Gvozdiy, Chair of the UNBA International Relations Committee Ivan Grechkivsky, Chair of the UNBA Committee on Independence of Justice and Judiciary Oleksiy Malovatskyi.

The topic of the conversation was the possible directions of cooperation between the UNBA, and the Project devoted to growing public confidence in the courts and the interaction of participants in proceedings in the interests of independent and fair justice.

"Since the Bar is classified as a part of the justice system by the Constitution, we closely observe what problems arise in the judiciary and have been dealing with these issues for a long time," Lydia Izovitova explained about her own 16 years of experience in the High Council of Justice.

According to Esther de Roy, in recent years, pilot projects have been implemented in the regions of Ukraine, in which judges and advocates were involved, in particular, in the Odessa region. This project is "Rules for the Organization of Effective Civil Proceedings" and "Rules for the organization of Criminal Proceedings", which the Bar Council of Ukraine at one time refused to support due to the existing risks for carrying out of effective advocacy in accordance with these recommendations.

"We agree that we will work together and be jointly responsible for the documents that we will be guided by. When we analyzed the previous draft, we did not understand who was more frivolous among the developers of these documents: judges who wanted to simplify procedural rules in their favor, or advocates. On our part, I can assure you that we will not allow our final product to be not in favor of independent justice", said Lidiya Izovitova.

She stressed that when developing any recommendations, the willingness of the parties to the proceedings should be taken into account to avoid rules favoring certain parties. "When we talk about guidelines, this is one thing, and when we talk about working in a practical area, it is another. Disciplinary bodies have been established in the Bar that can consider complaints against advocates for abuse of rights. As for judges, there are such bodies, but they have ceased to work, and today there is a basis for unpunished abuse in the processes by judges," Lidiya Izovitova stressed.

As an example, she cited the court's decision to take a person into custody because the defenders of this person filed too many recusals, and also mentioned other practical cases of obvious violations.

For her part, the Head of the "Judiciary and Society in Ukraine" Project of the Center for International Legal Cooperation, who is also Deputy Head of the Amsterdam District Court for International Cooperation and the Rule of Law, Esther de Roy offered cooperation on a wide range of issues of the judiciary in Ukraine. "We must jointly identify the needs and opportunities in the justice system that need to be improved. We have the Convention for the Protection of Rights and Fundamental Freedoms, Article 6 "Fair Trial", which provides for the rights to a fair trial within a reasonable time," the project manager said.

For his part, Oleksiy Malovatskyi recalled the experience of the Project's cooperation with the High Council of Justice and proposed that the developments that international experts currently plan to implement together with the UNBA should be implemented as the law and take into account the position of the Bar in dialogue with the legislator.

It should be noted that this is the second meeting of the UNBA leadership with representatives of the project "Judiciary and Society in Ukraine" of the Center for International Legal Cooperation.

The project's activities are focused on the analysis of fundamental values of justice and the foundations of public confidence in the judiciary, conducting trainings on quality assurance and proper justification of court decisions that will result in proper perception of court decisions by citizens; round tables on efficiency, timeliness, transparency and the expected course of court hearings; seminars to develop recommendations for improving the judicial process, expert discussions and knowledge exchange between the judicial communities of Ukraine and the Netherlands.

Details about the project can be viewed on the Center's website