On January 13, the Director of the Representative Office of the Ukrainian National Bar Association in Hungary paid a working visit to the Embassy of Ukraine in Hungary 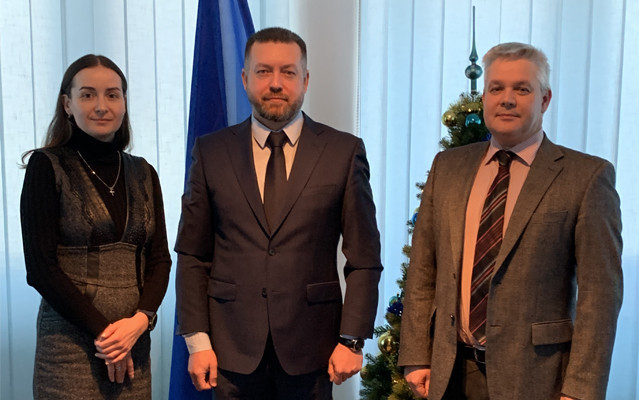 During the meeting, cooperation between the Embassy of Ukraine in Hungary and UNBA Representative Office in Hungary in 2021 was analyzed regarding:

- protection of the rights and interests of Ukrainian citizens temporarily or permanently staying on the territory of Hungary;

- results of cooperation with the Hungarian Bar Chamber on the involvement of Hungarian advocates to protect Ukrainian citizens.

Plans and measures of cooperation between the Embassy of Ukraine in Hungary and UNBA Representative Office in Hungary for 2022 were also agreed.

During the meeting, special attention was paid to the issue of increasing the number of detentions by the Hungarian competent authorities of Ukrainian citizens on suspicion of committing crimes defined in the Criminal Code of Hungary as "Human trafficking".

Sanctions for the commission of these types of crimes, depending on the qualifying circumstances, provide for imprisonment from 2 to 15 years.

The number of detained citizens of Ukraine for 2020-2021 is about 100 people and this situation unfortunately tends to persist in 2022.

In their vast majority, Ukrainian citizens are recruited as ‘carriers’ of groups of illegal migrants from the Middle East through ads in social networks and groups in messengers. Typically, young Ukrainian people aged 20 to 30, with a residence permit in any EU country become involved in illicit activities, as "recruiters" are specifically looking for Ukrainian students studying at higher education institutions in the EU.

In the future, the organizers of the international channel of illegal migration rent a vehicle in Hungary in the name of Ukrainian citizen and order the "carrier" to pick up a group of illegal migrants from point "A" (usually this is the territory in the east of Hungary) and by high-speed highway ordered to deliver illegal migrants to point "B" (a stipulated place near the Hungarian-Austrian or Hungarian-Slovenian border).

"Carriers" from among the citizens of Ukraine are assured that in case of detention by the police, they will be brought only to administrative and not criminal liability and will be punished in the form of minor fine. Of course, this is not true.

To prevent cases of these types of crimes committed by citizens of Ukraine, the Embassy of Ukraine in Hungary and the UNBA Representative Office in Hungary agreed to take the following preventive measures:

- to place a dedicated material for citizens of Ukraine at the official website of the Embassy of Ukraine in Hungary warning to refrain from committing acts that, in accordance with the Criminal Code of Hungary, constitute "Human Trafficking";

- to place in the central and regional media of Ukraine information for citizens of Ukraine with a warning to refrain from committing acts that, in accordance with the Criminal Code of Hungary, constitute "Human trafficking";

- to appeal to the law enforcement agencies of Ukraine and Hungary to intensify the work on exposing not only the mere ‘carriers,’ but rather the masterminds of international channels of illegal migration, that attract Ukrainian citizens from socially vulnerable population to their international criminal activities;

- with the assistance of the Chamber of Advocates of Hungary to attract a greater number of Hungarian advocates who are ready to act as defenders for Ukrainian citizens, including pro bono in these categories of criminal proceedings.

At the same time, during the meeting, attention was paid to the annual increase in the number of temporary workers in Hungary from among the citizens of Ukraine.

In this regard, the parties reached a common opinion that it is necessary to be prepared in advance for an annual increase in the number of appeals from Ukrainian citizens working on the territory of Hungary regarding the protection of their labor and social rights, including an increase in applications for legal assistance in case of accidents and injuries at work.

To exchange information and support cooperation, the parties agreed to hold systematic working meetings in the future.

In accordance with this Regulation, in order to improve the work of the UNBA in the international arena, the current legislation of Ukraine, the UNBA Statute and the Regulations on the Bar Council of Ukraine, approved by the Constituent Congress of Advocates of Ukraine from On November 17, 2012, additional bodies may be created in the UNBA system, including separate foreign units (branches, representative offices).

Financing of UNBA representative office abroad is carried out at the expense of sponsors (individuals and legal entities), charitable foundations (organizations) and is based on the principle of self-financing.

UNBA, BCU do not provide funding and do not cover the operating costs of the UNBA representative office abroad.

UNBA representative office abroad is not a legal entity and carries out activities independently in the interests of UNBA and within the legislation of the host country (registration).